Forget 12 Days of Christmas (since it isn’t even Christmas yet) as TGV Cinemas, one of Malaysia’s largest owners and operators of premier multiplexes kicks off their latest customers reward campaign exclusively in their newly opened locations in Cheras Sentral and Encorp Strand Mall.

Aptly named TGV Cinemas 30 Days of Goodies, TGV Cinemas is giving out movie tickets or popcorn sets to the first 100 patrons that can complete their “Hashtag for Freebies” task. 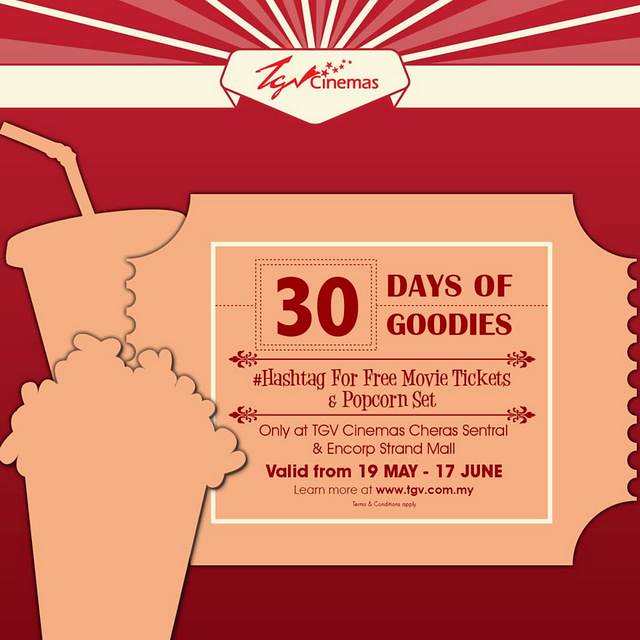 Gerald V Dibbayawan, Chief Executive Officer of TGV Cinemas shared that this is part of the cinema chain’s on-going efforts celebrate the opening of their new locations with their patrons and movie-lovers.

“In addition, the campaign is also our way of thanking and rewarding our patrons for making TGV Cinemas their preferred cinema,” added Dibbayawan.

The 30 Day of Goodies began on May 19 and will continue until June 17, 2014. Each day of the week, TGV Cinemas will give out either movie tickets or popcorn sets.

Movie-lovers and patrons of TGV Cinemas Cheras Sentral and TGV Cinemas Encorp Strand Mall will need to take a photo of themselves together with the TGV Cinemas signage (from the respective malls), upload the photo to either Facebook, Twitter or Instagram and hashtag #tgvcinemas and #cherassentral OR #encorpstrandmall. If all is in order, they will receive their freebie of the day.

Dibbayawan added that the idea stemmed from noticing how the majority of young people today like to take selfies.

“We are deliberately making it easy for our patrons to redeem goodies, so we welcome one and all!”

For more details about TGV Cinemas’ 30 Day of Goodies, public can go to www.tgv.com.my or log on to the Facebook page at fb.com/tgvcinemas. 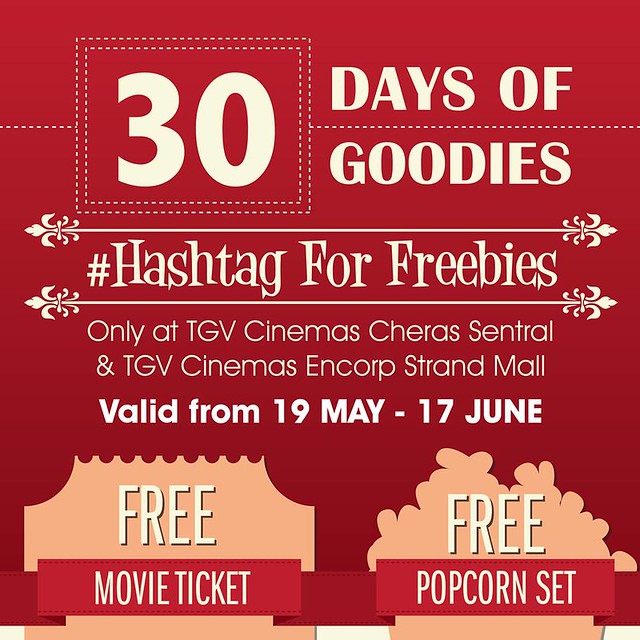 TGV Cinemas Sdn Bhd (TGV Cinemas) is one of Malaysia’s biggest operators and owners of premier multiplexes. Located in major shopping centres in Kuala Lumpur, Selangor, Negeri Sembilan, Perak, Penang, Johor and East Coast of Peninsular Malaysia, to date, TGV Cinemas has 22 multiplexes with more than 170 screens and some 34,000 seats in its fold. TGV Cinemas commits to ensure and evolve the needs and wants of the movie-goers. TGV Gurney Paragon is TGV Cinemas’ fourth IMAX® theatre in Malaysia. The third IMAX® theatre was opened recently in TGV Tebrau, Johor Bahru, with the second in TGV 1 Utama in March 2013. The first IMAX® theatre was opened at TGV Sunway Pyramid in 2011. More information about the company can be found at www.tgv.com.my. You may also connect with TGV on Facebook (www.facebook.com/tgvcinemas) and Twitter (www.twitter.com/tgvcinemas).