SYNOPSIS SLIT-MOUTHED WOMAN
Legend has it that 30 years ago in Japan, a suburban town was terrorized by the spirit of a woman whose beautiful face had been grotesquely disfigured by a jealous husband. Roaming the streets wearing a long coat and surgical mask, the spirit would approach her young victims and, while removing the mask, ask if she was pretty. The victim’s response would almost always lead to their violent death. Now, one by one, children are disappearing again. As teachers and officials desperately begin to investigate, a panic begins to build as the woman’s spirit returns for some unfinished business and the town’s dark secrets are exposed. Note: Events in this film are based on an actual story from Japanese mythology.

For your viewing convenience, kindly click on the link below for the movie trailer:

Also included here are 2 picture stills from the movie. The first one should give you a general idea behind the movie’s title character. The second one is guaranteed to make you jump right out of your seat.

THE SLIT MOUTHED WOMAN opens in Malaysian cinemas on May 1st 2008. 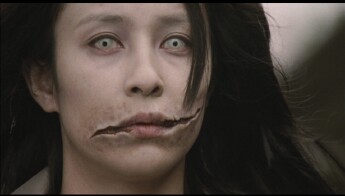 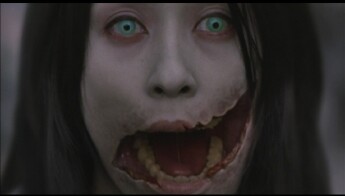