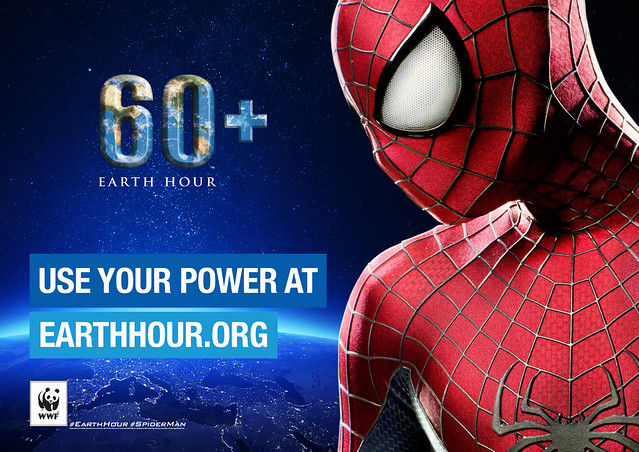 Spider-Man And Stars To Join Earth Hour Event In Singapore

[dropcap]S[/dropcap]INGAPORE/LOS ANGELES, FEBRUARY 27TH, 2014: WWF Singapore and Earth Hour Global today announced the director, producers, and cast of the highly anticipated upcoming motion picture The Amazing Spider-Man 2 will be coming to Singapore to celebrate this year’s global flagship event for Earth Hour, the world’s largest environmental grassroots movement, to be held at The [email protected] Bay on Saturday March 29 at 8:30PM.

Spider-Man will join the film’s stars Andrew Garfield, Emma Stone, and Jamie Foxx in the event, helping to switch off the lights across Singapore’s signature Marina Bay skyline. The stars will also be throwing their support behind Earth Hour’s newly launched crowdfunding and crowdsourcing platform – Earth Hour Blue, with a message to individuals across the world to become Super Heroes for the planet.

“We’re so excited that our first Super Hero ambassador for Earth Hour will join us for the global celebration of our planet in Singapore. Since moving to Singapore, one of the world’s greatest hub cities, Earth Hour has positioned itself in the region with a rapidly growing digital presence that has helped power our movement. Earth Hour Blue enables an every day digital action that can inspire individuals to do something so powerful from the palm of their hand,” said Andy Ridley, CEO and Co-Founder of Earth Hour.

While Earth Hour has grown from a lights out event to the world’s largest grassroots movement for the environment, the actual dedicated hour remains a key driver of wider engagement to act on environmental priorities across the world.

“The Earth Hour platform is an incredible way to engage businesses, governments and individuals to help protect the planet. In line with the spirit of this global campaign to inspire simple yet long-lasting changes that can positively impact the planet, our hope is that Singapore will be a global leader in inspiring sustainable actions,” says Ms Elaine Tan, CEO of WWF-Singapore.

From its global headquarters in Singapore, Earth Hour has developed and launched Earth Hour Blue, a new crowdsourcing and crowdfunding platform that enables anyone to support environmental projects all over the world. The stars of the highly anticipated movie The Amazing Spider-Man 2 are among the first backers and supporters of Earth Hour Blue.

Andrew Garfield, who plays Peter Parker/Spider-Man, is supporting the Earth Hour Blue project ‘A Flame Called Hope’. The project aims to provide clean bio-gas energy for local communities in Nepal, thereby reducing deforestation and providing an alternate means of livelihood for families in the area.

“I’m proud Spider-Man is the first Super Hero ambassador for Earth Hour because he shows we can all be Super Heroes when we realize the power we all have,” says Andrew Garfield. “Earth Hour is a movement that has created massive impact around the world.”

Emma Stone, who plays Gwen Stacy in the film, has chosen to support the Earth Hour Blue ‘Puppy Protectors’ project, which aims to train sniffer dog puppies and their handlers to track animals, find wildlife crime scenes, detect illegal trade items, and chase down poachers with the rangers on the frontlines of Chitwan National Park, Nepal.

“Earth Hour gives you the power to inspire anyone, even if you’re just one person. There are great projects from the crowd, for the planet, happening all over the world,” says Emma Stone.

The Amazing Spider-Man 2 director Marc Webb is backing the ‘Power up a Ranger’ project in Indonesia, which aims to provide better equipment for WWF Rangers protecting Indonesia’s endangered wildlife such as the Sumatran Tiger, Elephant, Rhino and Orangutan and their forest habitat.

The director is also a judge in WWF Singapore’s film competition “Use Your Power”, which will engage young filmmakers across Singapore to produce engaging, innovative, and creative short films that show the connection between people and environmental issues.

WWF-Singapore is also joining the Blue revolution through their crowdfunding campaign to expose and end the illegal sale of target wildlife species within Singapore. The organisation is also crowdsourcing pledges from individuals and organisations for local sustainability actions such as raising air conditioner temperatures by one degree Celsius, switching to LED lights and reducing the consumption of plastic bags.

Expanding on many sustainability efforts over the years, The Amazing Spider-Man 2 became the most eco-friendly tentpole production in the history of Columbia Pictures. These environmental efforts, on set and off, were supported at every level – from producers, studio executives, and cast and crew and began as soon as the film went into pre-production.

“I’m very proud of the fact that The Amazing Spider-Man 2 is entirely carbon-neutral. We made a commitment to be as eco-conscious as possible during production itself, when we took a special effort to think green and avoid waste; now, completing that process with Earth Hour Blue is a wonderful testament to what we can achieve when we all work together,” says Jeff Blake, Chairman, Worldwide Marketing and Distribution, Sony Pictures Entertainment.

Now run globally from Singapore at the heart of Asia, Earth Hour has rapidly grown to involve hundreds of millions of people from all walks of life and global landmarks across 7000 cities and towns and 154 countries and territories.

About Earth Hour
Earth Hour is a global environmental movement of WWF. Headquartered in Singapore, Earth Hour is one of the first opensourced environmental campaigns; it has grown from a symbolic event in one city into a global movement, crowdsourcing actions from individuals, businesses, organizations and governments to generate environmental outcomes. In 2014, Earth Hour Blue sees the movement enter the most exciting stage of its evolution, to be at the forefront of crowdfunding and crowdsourcing for causes, innovation and creativity for the planet.

About WWF
WWF is one of the world’s largest and most respected independent conservation organizations, with almost five million supporters and a global network active in more than 100 countries. WWF’s mission is to stop the degradation of the earth’s natural environment and to build a future in which humans live in harmony with nature, by conserving the world’s biological diversity, ensuring that the use of renewable natural resources is sustainable, and promoting the reduction of pollution and wasteful consumption.

About The Amazing Spider-Man 2
We’ve always known that Spider-Man’s most important battle has been within himself: the struggle between the ordinary obligations of Peter Parker and the extraordinary responsibilities of Spider-Man. But in The Amazing Spider-Man 2, Peter Parker finds that a greater conflict lies ahead.
It’s great to be Spider-Man (Andrew Garfield). For Peter Parker, there’s no feeling quite like swinging between skyscrapers, embracing being the hero, and spending time with Gwen (Emma Stone). But being Spider-Man comes at a price: only Spider-Man can protect his fellow New Yorkers from the formidable villains that threaten the city. With the emergence of Electro (Jamie Foxx), Peter must confront a foe far more powerful than he. And as his old friend, Harry Osborn (Dane DeHaan), returns, Peter comes to realize that all of his enemies have one thing in common: Oscorp. Directed by Marc Webb. Produced by Avi Arad and Matt Tolmach. Screenplay by Alex Kurtzman & Roberto Orci & Jeff Pinkner. Screen Story by Alex Kurtzman & Roberto Orci & Jeff Pinkner and James Vanderbilt. Based on the Marvel Comic Book by Stan Lee and Steve Ditko. The film will be released in theaters internationally beginning April 16, 2014, and in the U.S. on May 2, 2014. #SpiderMan

About Marvel Entertainment
Marvel Entertainment, LLC, a wholly-owned subsidiary of The Walt Disney Company, is one of the world’s most prominent character-based entertainment companies, built on a proven library of more than 8,000 characters featured in a variety of media over seventy years. Marvel utilizes its character franchises in entertainment, licensing and publishing, including licensing the Spider-Man universe to Sony Pictures. For more information visit marvel.com. ©MARVEL