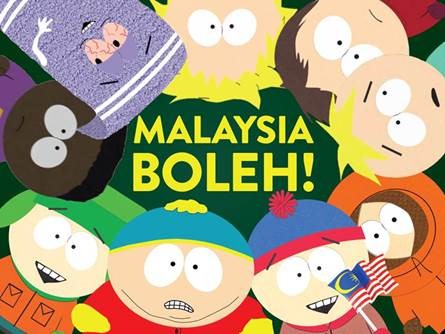 The first and only all-comedy channel launched is available to be subscribed via ala carte option at RM9 per month, or via HyppTV’s value package under “HyppTV’s Mega Pack” and “HyppTV Platinum Pack” on HyppTV Channel 609. This will enable about 700,000 HyppTV subscribers to get free access to the best of Comedy Central Asia’s award-winning comedy for the entire month of September.

The channel is also available on HyppTV Everywhere mobile app, making it accessible for Comedy Central HD viewers to watch, not just at home but on their portable smart devices, and PC as well. It also comes complimentary with a Video On Demand channel via Comedy Central HD On Demand (Channel 851).

“We are expecting to hear added roars of laughter in Malaysia! Comedy Central Asia’s expansion with TMNet’s HyppTV enables us to meet the growing demand for comedy entertainment anytime and everywhere across Malaysia. Hypp TV subscribers may enjoy fan favourites fresh from the U.S. like Emmy® Award-winning The Daily Show with Jon Stewart and Saturday Night Live, with 24/7 access to first and exclusive Asia premiere comedy shows on linear television as well as personalized devices.” said Paras Sharma, Vice President of Comedy Central and MTV Brands and Digital Media, Viacom International Media Networks Asia. “We are also excited to collaborate with a national pride and award-winning Malaysian-born comedian Ronny Chieng, who is being featured this September.”

HyppTV currently offers its customers a total of 121 channels with 41 channels in High Definition (HD) – consisting of 54 premium channels, 21 free channels, 8 Radio Channels, 16 Video-On-Demand (VOD) channels and 22 interactive channels in variety of value packages and ala-carte options. HyppTV is powered by TM’s high speed broadband service, UniFi and Streamyx 4Mbps and 8Mbps which are available to viewers come rain or shine through its residential and business UniFi and Streamyx packages. HyppTV customers can also enjoy the world class entertainment lined-up on the move via HyppTV Everywhere. To date, HyppTV has close to 700,000 subscribers.

Comedy Central, the world’s Number One and biggest comedy network, has been making audiences laugh since it first launched in the United States in 1991. Renowned for featuring a stable of exclusive and tailor- made local and international comedy, the brand has become the ultimate destination for all kinds of humour, from traditional to satire to sketches to popular sitcoms. Comedy Central Asia launched on 1 November 2012, and is VIMN Asia’s first adult-skewed network. Targeting viewers aged 18 to 34 years old across Southeast Asia with comedy content round-the-clock, Comedy Central Asia is the only 24-hour all-comedy channel to showcase Asian and international comedy and comedic talent. Outside of the United States, Comedy Central is seen in more than 200 million homes in over 70 countries around the world. For more information about Comedy Central in Asia, visit www.comedycentralasia.com and Twitter feed at @ComedyCentralAS.

Viacom International Media Networks (VIMN), a unit of Viacom Inc. (NASDAQ: VIA, VIAB), is comprised of many of the world’s most popular multimedia entertainment brands, including MTV, Nickelodeon, Comedy Central, BET, Paramount Channel, VH1, VIVA, COLORS, Game One and Tr3s: MTV, Música y Más. Viacom brands are seen globally in more than 600 million households in 170 territories and 37 languages via more than 200 locally programmed and operated TV channels and more than 550 digital media and mobile TV properties. For more information about Viacom and its businesses, visit www.viacom.com. Keep up with Viacom news by following Viacom’s blog at blog.viacom.com and Twitter feed at www.twitter.com/Viacom.

Malaysia’s fastest growing IPTV service, HyppTV is available to Streamyx and UniFi customers nationwide. TM’s UniFi is currently being offered via three (3) residential packages. The residential triple-play packages are VIP5 at RM149 a month, VIP10 at RM199 a month, and VIP20 at RM249 a month. For Streamyx, HyppTV is available with 8Mbps as part of its triple play service at RM160 a month that includes 21 free channels, while for 4Mbps subscribers, HyppTV is offered as an add-on service with a commitment of a HyppTV Pack for a minimum of RM30 a month that also comes with 21 free channels. HyppTV’s multiscreen offering can be enjoyed by downloading the HyppTV Everywhere apps on Androids Play Store or Apple’s App Store hence you can now watch your favorite HyppTV programmes on smartphones, tablets or PC. HyppTV is also available to UniFi and Broadband business customers.
       
 HyppTV has most recently been honoured with the Best Component or Enabler Award at TV Connect Industry

 (previously known as IP&TV Industry awards) in London, this year. This is the second year in a row the service was recognised at the international front as HyppTV was awarded the Best Online TV Service or Solution at the same award ceremony in 2013. With these awards, HyppTV created history by being the first Malaysian IPTV service to win an award at the prestigious event, which For more info on HyppTV, log on to www.tm.com.my/hypptv and visit our Facebook page at www.facebook.com/hyppworld.