dimsum invites an army of ghost to Malaysia. A new Singaporean horror series, Die Die Also Must Serve starring Shane Pow, Nick Teo and Ya Hui arrives on dimsum every Thursday to Saturday at 12.30am. 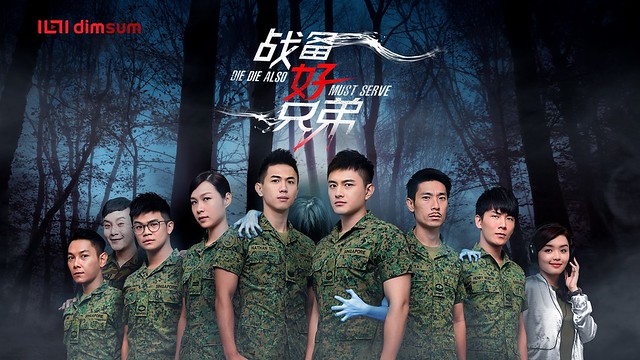 Set in the background of National Service in Singapore, the hair-rising series does not only revolve around the brotherhood among the servicemen, but more importantly, it reveals infamous paranormal encounters that happened in the army. Do the spirits really exist or are they merely the wild imaginations of the NSmen?

The horror story begins when a rookie radio DJ Zhong Wei Yu, nicknamed Toro is tasked to host a midnight supernatural show that discusses ghost tales in the army camps. While she is worried that no one will call in, she is greatly relieved when a listener, Wu Zhi Xing calls in and enthusiastically shares about his experience, which includes the stories of Female Opera Singer, Japanese Soldier, Offerings to The Dead, The Old Lady and Her Granddaughter, Replacement and Mysterious Old House.

Unexpectedly, weird incidents start to happen one after another, and get increasingly spookier. Soon, Wei Yu even realizes an untold yet alarming secret of Wu Zhi Xing…

Whether you believe it or not, the tale is guaranteed to make your hair stand on end. dimsum is currently available in Malaysia and Brunei, supporting Chromecast, AirPlay, Samsung Smart TV for subscribers to binge-watch all on TV.
For more information, visit dimsum.my, dimsum official Facebook (facebook.com/dimsum.my) or Instagram (@dimsum.my).