AirAsia offers 20% off all seats, all flights

For three days, guests are able to enjoy the 20 percent discount for immediate travel on any flights to any destinations just by logging in to www.airasia.com. The travel period for this ‘Awesome 20% Sale’ is from 30 January – 26 April 2012. 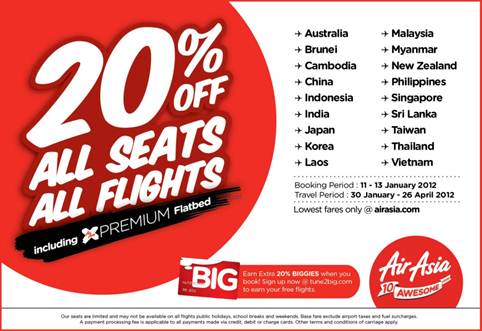 AirAsia’s Regional Head of Commercial, Kathleen Tan says, “As part of our commitment in providing low fares, AirAsia is offering this ‘Awesome 20% Sale’ throughout both AirAsia and AirAsia X’s route network so that guests are able to connect to more than 80 destinations in 23 countries. We recognize the need for affordable air travel, and especially for those who are travelling immediately, this promotion will enable them to enjoy even lower fares to any of the over 165 destinations that AirAsia and AirAsia X fly to. ”

Guests who book their seats along with add-ons such as pre-booked meals, Baggage Supersize, Pick-A-Seat during the promo period will also be entitled to an extra 20 percent BIGGIES (loyalty points) from AirAsia’s loyalty program, BIG. Earn BIGGIES (loyalty points) every time you spend with AirAsia and other BIG partners worldwide to redeem free flights with the world’s best low cost airline. Sign up for BIG now at www.tune2big.com.

AirAsia’s holiday division, AirAsiaGo is also offering 10% off selected destinations’ hotels during the same booking period of 11 – 13 January 2012. The travel period for this promotion is also from 30 January – 26 April 2012. To make holidays more interesting and memorable, guests may log on to airasiago.com to be able to mix and match their preferred tour and activities, apart from affordable holiday packages and lodging. Together with the partnership with Expedia, the travel portal has 130,000 hotel partners around the world.

Guests are also able to enjoy the ‘Awesome 20% Sale’ via AirAsia’s mobile apps on Blackberry, iPhone and Android devices, or via mobile.airasia.com on WAP enabled phones.