The Aviation Awards Asia aims to be a primary industry-recognition program dedicated to one of the fastest-growing regions in the aviation industry. The program celebrates and recognizes champions in the Asian aviation industry, promoting best practices and providing a platform for the industry to assess trends and develop strategies for the future. 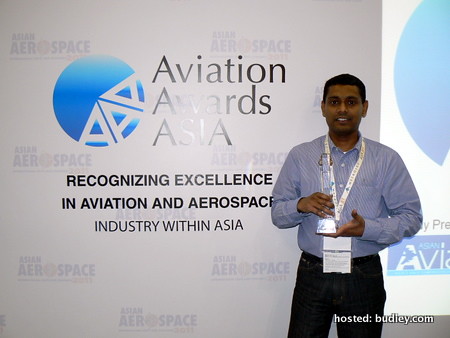 Sathis Manoharen, Regional Head of Cargo, AirAsia, said, “We are very happy to have received this award in the very first Aviation Awards Asia which celebrates and recognizes champions in the Asian aviation industry. It is an honour to be recognised by your peers, and the award is testament to the efforts and belief of everyone involved in AirAsia Cargo to make us what we are today. The award comes right after we were named the Fastest Growing Airline for Cargo by the Guangzhou Baiyun International Airport. To be recognized in China, and now the whole of Asia as market leaders in the cargo industry will only spur us on to greater heights.”

AirAsia is the first major low cost carrier to have a web-based booking system for cargo at www.cargo.airasia.com. The open-based system allows tracing of air waybills on cell phones, smart phones and I-pads with internet connectivity. The system not only helps increase efficiency in cargo bookings but also reduces the cost of cargo operations. The airline has embedded a chat function in the AirAsia Cargo System (AACS) which allows their valued business partners to communicate with us frequently and at real time but with minimal cost to their business partners and the airline. AACS was developed and structured internally with the collaboration of our outsourced partners and programmers in India. AACS has provided AirAsia an efficient booking system which is paperless compared to its previous manual platform through excel spreadsheets. Average booking confirmation time with the new system is only between 8 to 10 seconds compared to 75 minutes using the manual platform.

Azran Osman-Rani, CEO of AirAsia X said, “The AirAsia Cargo Service is a product that serves both the primary and secondary markets predominantly in ASEAN, Australia, Stansted, Orly, China, Taiwan and India. We are the first major low cost carrier to be actively engaged in the cargo service. The widebody feed through AirAsia X from Australia, Europe, China and Delhi augurs well with the cargo model we have developed for the narrow bodies that has unrivalled frequencies in ASEAN, serving the ASEAN region with cargo efficiently.”

“Typically, low cost carriers shy away from cargo due the short turn-around times, but AirAsia has successfully made it work and now the business is ingrained as part of our service offerings. With a 25 minutes turnaround time, we are loading anywhere between 2.5-3.0 tonnes of cargo on the narrow-body (bulk loading) and on the wide-body (using ULD’s) within a 60 minutes turnaround time we load anywhere between 14-16 tonnes. The synergies between our wide-body and narrow-body aircraft has successfully allowed this business to grow into a productive one. In fact, our operational efficiency has been above industry average which is testament to the success of the business. We are pleased with the recognition received, proving that anything is possible if we have our hearts into it,” concluded Azran.

Asia’s largest low-cost carrier has been tying up with more cargo agents and large export-import firms in the markets that AirAsia flies to. It is also reaching markets beyond its current route network through other airlines with which AirAsia has special pro-rate agreements which includes South African Airways, Qatar, Ethihad, Emirates and Gulf Air. These major airlines extend AirAsia’s reach to more cities in East Asia, the Middle East and Africa.